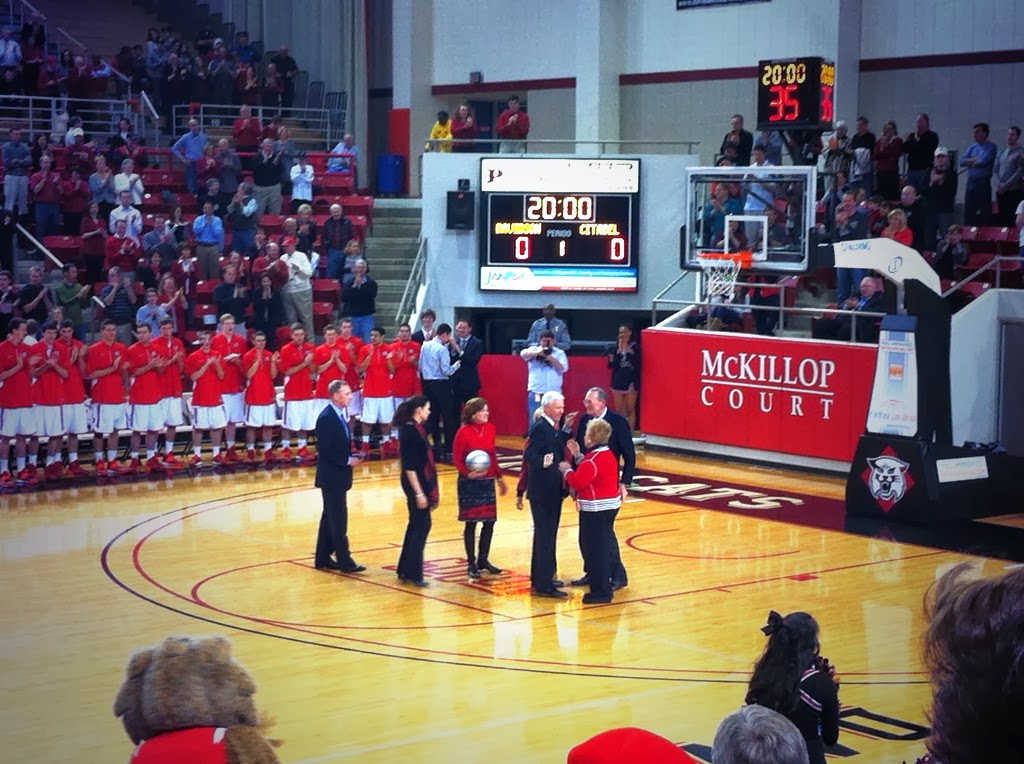 I haven't written much about Davidson basketball season here lately. That's because I've been writing about it elsewhere - on blank white cyber sheets of paper, daunting blank documents where the blinking cursor begs for alphabet brilliance but instead brings on a panic attack.

You're probably going to read a lot about my memoir-in-progress over the next two years - I'll probably over-share, curse, get a little whiny, get a lot terrified, get a little proud. (Sorry in advance.) But one of the main reasons I have taken on this program is so that I can learn the discipline of sitting down and writing even when I don't feel like it, even when what's coming out of brain into my fingers pressing the keys is no good, obvious, unstructured, unclear, frustratingly bad. I want to find that discipline within me to tell a story, because I have one - many, really - to tell.

A few weeks ago I sat down to begin my memoir - no pressure, right? Yeah, well, I felt it. I didn't know how to begin, or where I was going, even though I lived it. I had lived what I wanted to write and yet I couldn't make it come out onto the page. I wrote one page in four hours. It was stilted, going nowhere. What the hell was going on?

One thing I've read, learned, thought, talked a lot about since coming back from my grad residency is the FRAME of a piece. How a story is framed, its situation, its context, seems to simultaneously narrow down and flesh out what you're trying to do, to say. A microcosm. The more I thought about this, it made sense, and it especially made sense when I watched Davidson play in a heartbreaking OT tussle with Elon a couple of weeks ago.

And so I mulled about it. Then on the phone about five days later, Liz got it too. She got it so well she started brainstorming all over the place, and I started scribbling notes like someone at a fascinating lecture - which, truly, it was. Liz listened to me, mirrored back what she heard me say, added her own knowledge of my life, my place within the frame, the frame itself. "I think it's perfect," she said, and I felt myself glow. "I mean... It's your heart."

She's right; in so many ways, it is my heart, has been my heart for the past eight years. For some reason those winter nights in that warm arena have wedged themselves into this part of my story in ways that are almost unparalleled, unparalleled because they have blossomed beyond. The nights in the gym made way for my life outside to grow, expand, fill, shift. And each night I'm there, it's cozy and familiar, yet at the same time fresh and new and different.

In eight years, the team has changed, and keeps changing. I have changed, and keep changing. Sometimes the game is a battle. Sometimes it's a seamless victory. But always, whether they keep getting blocked or they float to the basket with ease - the team is surrounded by energy, support, love, faith of the people sitting in those bleachers.

So too have I been surrounded, when I get blocked, when I float easy.

On Saturday, my parents came to the game with me and I wore my bright red dress because I have always loved dressing up for basketball games more than parties. If I had long enough hair nowadays, I'd tie my red ribbon carefully around my ponytail just like I did in college. Plus, it was a red-letter day: Celebrating 25 years of our coach.

I thought about my frame as I sat between Mom and Dad and watched the arena fill up with friends, familiar faces, and players that I watched grow and excel on this same court. I watched the current team blast out of the tunnel to "Welcome to the Jungle," solid fresh faces. I watched Coach walk out behind his team, behind his assistant coaches, never one for a big entrance, the silver hair and sweet suit just suddenly appear, and there's clapping, and more clapping, and a slight incline of his head. He just wants to start the game.

But on Saturday, before the crouch for tip-off, before The Star-Spangled Banner - first, they had to rename the wooden rectangle where the players step and pivot, where their sneakers catch and squeak. The red banners were taken off the sideboards and the white lettering over the red stood out suddenly, almost royal, a proclamation.

So yes: there is a frame that keeps me going. He is one of many who helped build it before me, and for me, and after me. Through this frame I see myself grow in ways I never imagined. I see myself finding people, important people, best friends and mentors and the man I'm going to marry.

I see myself as part of a story that began a long time ago and keeps beginning, constantly creating.