Published, thanks to Charlie & friends. 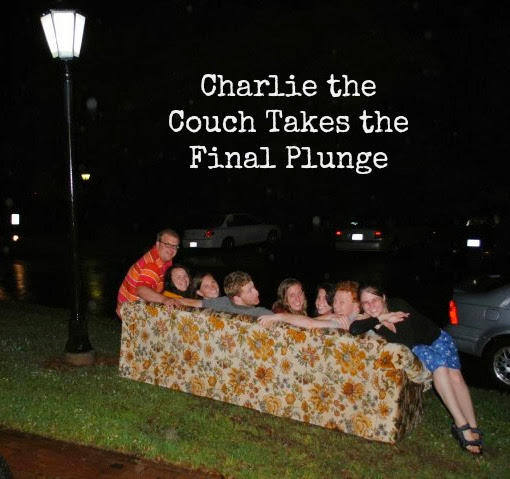 I have an essay published in Hippocampus Magazine this month, on the beginning of my transition from college to the real world. When I first drafted this piece at The Collegeville Institute in 2012, I was amazed at how easily the memories spilled out, and how fun it was to write them down. And now, over a year later, it's fun to share it as my first submission accepted for publication.

We, the girls, had discovered Charlie – and christened him such – at the start of sophomore year of college. He had been slouching abandoned in someone’s driveway, an ancient cream-colored sofa of the ‘70s, splattered with horrendous orange flowers the color of burnt mac and cheese. To conceal Charlie’s mournful mildew stains and cigarette singes, we fitted him with a dapper olive green cover and surrounded him with warm floor lamps and fluffy throw pillows. We claimed him and curled up on him, doing homework, celebrating birthdays, and watching cheesy sorority horror movies on Halloween. The boys liked Charlie too, though they always claimed that he possessed a whiff of something like cat urine, perhaps a remnant of his former life.

On that rainy night, only hours after we had crossed the stage and received our diplomas, they began to slowly peel away Charlie’s olive green covering. The apartment was silent, somber, littered with half-packed boxes. Then a whisper, I still don’t know whose, hissed into the quiet: “Let’s throw Charlie off the balcony.”