Thoughts on a new basketball season. 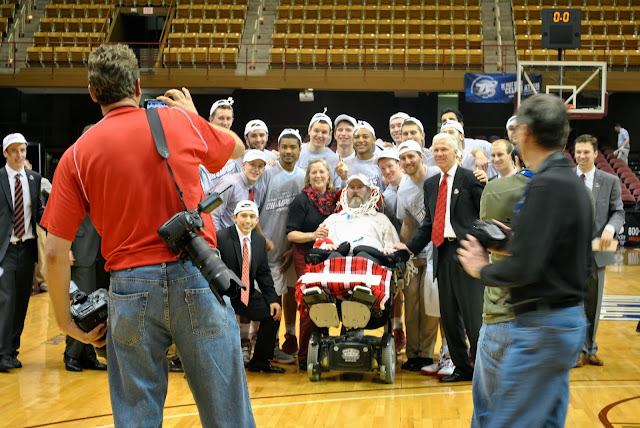 A couple of thoughts/feelings/observations/comments as college basketball season begins tonight and I begin my eighth (?!) season supporting the Davidson College Wildcats:

A courageous man named Dick Sanderson died on Wednesday. He was 61, and had battled ALS for nine years. When I looked at the clean-shaven photo in his obituary, I barely recognized him. But his bright eyes - those I knew. I've seen them at every home basketball game for seven years, shining happily behind his beard as he sat in his wheelchair in the back corner of Belk Arena with his wife, Dawn, beside him. He was always there. A beloved staple, like so many fans in this close-knit college town, and yet in a category all his own. Night in and night out, when you saw Dick Sanderson in his seat under the scoreboard with a red print blanket tucked around his legs, you witnessed his commitment to living, and living well. Some of us only had to push through rush hour traffic to get there. Dick had to push through more than we could even fathom, moment by moment, day by day. Half by half, game by game. In this marvelous 2007 article by Kevin Cary, Dick explained his devotion to the team, typing it out on the keyboard he had to use to speak: They are my arms and legs. I live vicariously through them. They make this disease a little more tolerable.


He always made it to Charleston, Chattanooga, Asheville, wherever the Southern Conference Tournament happened to be. And in 2007, the team began a tradition that continued as recently as eight months ago, through four SoCon championships: After the ceremonial cutting of the nets, these fresh-faced, jubilant college boys, who could have so easily been thinking of nothing but themselves, their victory, would surround Sanderson, hug him, pat him on the back, and drape the net around his neck. And in that moment it was clear. This was Dick's victory. Our victory. Always. In May, when I attended the basketball team banquet, each of the four graduating senior players gave a speech. They thanked their families, coaches, teammates, trainers - and each one thanked Dick and Dawn Sanderson. For their support, for their love, for their courage. Moments like those help me express why I'm so proud and grateful to say that I'm a part of this family too - people like Dick and Dawn, like this community, like generations of Wildcat players and coaches who have embraced him so dearly. They are the reasons I stand and cheer.

Tonight, in the midst of the fierce noise of Cameron Indoor Stadium, I know that Dick Sanderson will be in the heart of every player dressed in Wildcat red. They will play their hearts out for him. And on Monday night, our first home game of the season, everyone will look to the back right corner of the arena, just above the tunnel where the team makes their entrance. We will look for Dick in his regular spot. And though we won't see him, I hope we will realize he's still there, covering us with his courage, moving us to commit to life, hope, family, friends, ever a force behind this team and this community. Because love never ends. Rest in peace, Dick.

I found out yesterday that I've been accepted to start my MFA degree in January. I'm thrilled, and will share more as I continue to map out the journey. Today, though, I want to share part of my personal statement that I submitted, describing my life experiences with writing and what has led me to pursue a graduate degree in this field. Here's the excerpt:

In 2008, our college's men's basketball team nearly made the Final Four of the NCAA Tournament. This was a big deal in our little town, and around the country. Our underdog college of 1,700, where athletes are students first, was never expected to be one of the nation's top teams. It was March Madness in its purest form. And my peers and I were part of it. That basketball season brought the entire community together to witness a story unfolding before our eyes. As a writer, that's what the experience means to me, even five years later. The story of our rise from small-town college team to big time sports darling happened right in front of me. I watched it become a story. I can recount it backwards and forwards. I can tell you how that story still permeates the lore of that community and impacted the trajectory of many people's lives, including my own. It made me realize that story arcs are everywhere, that the world rotates on beginnings, middles and endings that so often go unnoticed. And I couldn't take them for granted anymore. I understood that I had my own stories to live and to write, and that the living and writing of them were profoundly connected.

It felt a little silly at first, writing this in a piece that would go before an academic committee. But as I recounted it, I realized that it is the simple truth, that I could never leave it out. Being even a small part of this program over the last close-to-a-decade (dear God), has changed my life and my approach to writing. And the best part is: The Elite 8 run began it, but doesn't own it. In fact, the stories that have sprung up since that season are magical in their own ways, as much as those ten days in March 2008.

Why? Because we stick with the story through the rebuilding years, and begin to understand that the magic has its roots in difficult nights, disappointments, hard work. Because watching a new team forge its own identity and learn the leadership of Trust Commitment Care is a privilege. Because sharing a community that spans the globe, that spans generations, is a gift.

Because we are all part of the same whole.

Because on any given night, anything is possible. Because win or lose, there will always be moments of our special magic. Because the story's about to get a new chapter.