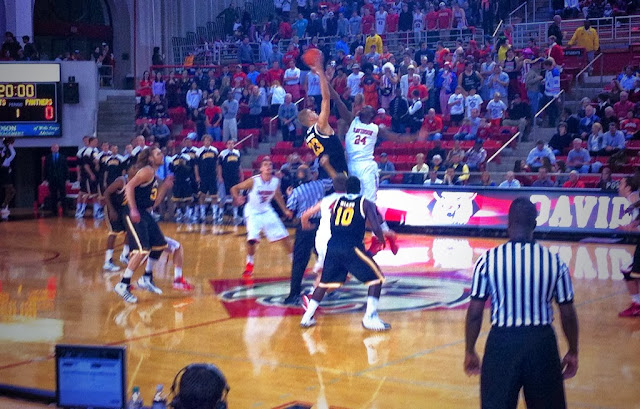 Last night, a friend, an alumna, came with me to the Davidson home opener, and we had a ball. When I watch a game with someone new (because despite only being a year apart, we had never connected at Belk before), I realize most clearly how deep a family and community of mine this has become. Mainly because by the end of the night, the person with me typically says something along the lines of, "Goodness, you know everyone!" And for even an inkling of "knowing everyone" (which of course I don't), I am so grateful. 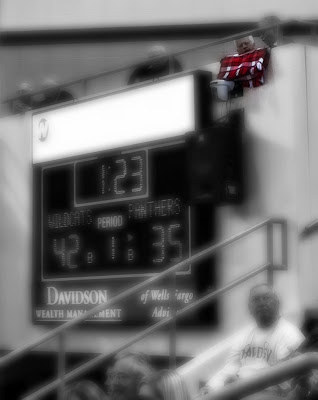 We had a moment of silence for Dick Sanderson before the game. I thought it so appropriate that by turning toward the flag out of habit before the Star-Spangled Banner, we had automatically turned toward his seat and bowed our heads. But I couldn't bow my head; I just stared at that empty spot above the players' tunnel. Later, in the middle of the first half, I noticed that the red-and-white-checked blanket that was always tucked around his legs had been draped over the rail, a quiet tribute amidst the roar of the game.

And speaking of the game - no, it didn't go our way. But dang, I still had so much fun. It was fun to watch players begin, appear, practice leadership no matter what the final buzzer declared. Fun to be back in that crowd. To see Steve, Bryant and Ben in the stands, history built into their bones, watching a new generation, to see Bryant greet Kilgo and join the broadcast. Fun to see the student sections fill up, and hear D Block echo, and cheer for the boys, for Brian, for Tom, for Andrew, for De'Mon, for all of them. Hell, even (especially?) when we bellow at the refs we feel like a (pissed off) family. It was fun to text my best friend watching the game on her computer in Texas. When the time came for reaching out, touching me, touching you, she pointed to her computer screen showing our small wooden arena.

After, I ventured into the Brickhouse, unsure of whether anyone had stayed around for a post-loss pint. Turns out they had, and it was lovely. As Lauren eloquently put it in less than 140 characters, "It was an old school night at the BH. Only staffers and die hards. Major throwback, and I loved it." It was a throwback, a reminder of what this all really means, win or lose, sitting around a table, food and drink and talking about life. Not a post-victory buzzing mosh pit, but still comfortably full. Sure, that early season frustration hung in the air, but it was tempered by a sense of There is more to this. There is more to why we're here. When De'Mon walked by, we smiled at him, patted him on the arm, took a sip, ate some fries, kept talking. He's ours, and will be ours, and that's true far beyond what happens on a court.

But perhaps my favorite part of the night was when I passed a cheerleader and another student heading back from Baker. They exchanged some words about the game, yeah, the end had been a bummer, and we don't quite know what this season will be like...

"But," said the student suddenly, assuredly, "We're on our way somewhere."

And with a firm nod of her head, hoisting her heavy backpack, our cheerleader responded, affirming this journey - our journey - with a hearty "Go 'Cats!"

So should we all.