In the kitchen, on the mountain, solid ground. 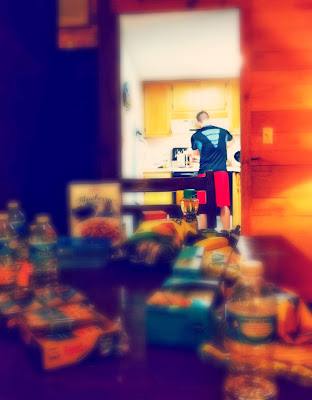 The second time we went out,

It was a cold late February night and he came through the coffee shop door wearing a wool hat and pink cheeks; he had walked from his house, after we'd exchanged numbers and texted our plans.

I had driven over, with a detour to my friend's place, where I yanked two outfit options out of a grocery bag. She pointed to the shimmery skirt and leggings, the one I'd been planning to wear.

And so he and I sat at one of the little wooden tables at ten o'clock at night, treading tender ground.  The ground that shakes with each step as you hold out your heart, thumping with futures unknown.

Back and forth, we told our stories. Big moments, little quirks. He liked cooking, he said, especially his grandmother's Cajun recipes, ham, sausage, red beans and rice soaked through with amber ale.

I'm no chef, I told him - it's messy, time-consuming, what if I burn it or make someone sick? Give me dish duty any day, warm cozy water, slippery soap, the sleepy reward of clean plates before bed.

That's fine, he said with a smile: I'll cook, and you can do the dishes.
When he spoke it, I could see it. The shaky ground turned solid.

In three years, we've learned that I do like to cook.
And that our stove top styles are quite different.

He got the ease and grace of his beloved Grams; she taught him at her New Orleans stove. He reads a recipe once, never looks back: chops neatly, peppers and pours by feel, knows it will turn out great.

I mangle chicken and spill flour, toss garlic into the pan in lazy chunks. I read the recipe, read the recipe, and - was that 1/3 or 1/4 cup? - read it again, antsy about the outcome until the first bite.

I've mastered my mother's chicken pie, the one recipe I don't triple check, whisking butter and flour and milk into a rosemary-tinged roux. And I bake: almond cake, pumpkin bread, molasses cookies.

We inhabit the kitchen in such different ways that we tend to let each other alone til the oven beeps. Then we eat together. Delicious, I say, forking a bite. You're a great cook, he says between mouthfuls. 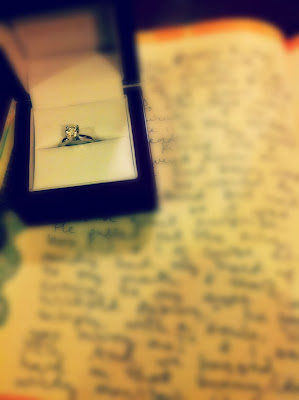 Ten days ago,
I woke up to blueberry-studded pancakes.

He had hot water steaming and ready for my tea, set out with maple syrup and a bowl of strawberries. After, I scrubbed the dishes with silky blue suds and set them to drip in the drain. Life together.

We hiked to a mountaintop and he knelt down in the middle of a meadow. No hired photographers hiding behind shrubs, no hype, just simple, us, our truth. A question, an answer. Solid ground.

The ring wouldn't fit on my finger, my knuckles too swollen from walking and wind. I could not have cared less. He grinned and tucked the box back into his pocket; we descended to a new chapter.

In the mountains, away from cell towers, cable, wireless, I sat at the table and scribbled. He cut up the chicken and placed it carefully in the pan full of olive oil. Nothing but comfort, kitchen sounds, him.

Suddenly he was beside me, back with the sleek burgundy box. He opened it, a silvery glint. I rolled the ring to my knuckles, the right size now. Water boiled for spaghetti as he slipped it on my finger.

Actually, I had never stopped.
Posted by Claire Asbury at 12:15 AM
Labels: 20something life, family, gratitude, ordinary goodness, relationships, wedding

this is lovely.
congrats!

what a pleasure to read. best wishes for a blissful future!

I've read this four times (and commented once into the void) and cried every time. I love that you told your story around the kitchen and the life at table. This was beautiful, Claire.

Claire, your writing is as beautiful as you are. Thank you for capturing these tender moments and sharing.

Congratulations, Claire! This is wonderful news. Thanks for sharing so beautifully.