In honor of my brother on his birthday. 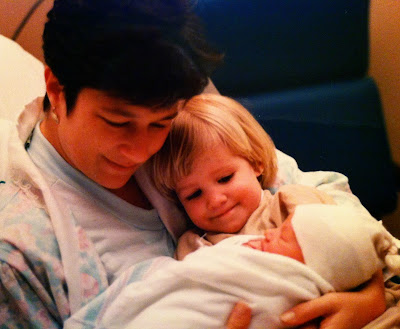 My little brother, who for years now has been taller than me, was born the day before Halloween. I'd just turned two, and had to stay Halloween night with our grandparents. The first memory that I can claim as my own - separate from home videos, stories and photographs - is of watching in horror as monsters came again and again to Nana and Pop Pop's front door.

I always say it's lucky that I didn't come to associate that baldheaded baby, or the taller-than-me man that he's become, with those feelings of sheer terror. But really it's not luck, it's who he is, someone who evokes humor and goodness, quite the opposite of my Halloween fears.

I went to the hospital and held him with Mom's help, a fresh Big Sister sticker pressed special on my shirt. He grew baby swathes of light curls that slowly turned a flatter bristle-brush brown, but it magically curls still when he goes weeks without a trim, almost 'fro-ish at times. I feel like he's had his low voice forever. He and a friend began a sports podcast this year, and I listen because I love sports, but more because I miss his voice, ten hours away now, in his element as he banters stats and predictions and ethical dilemmas. Then when I watch home videos, I remember his little boy voice, and I'm thankful that in both voices, he's always been a sharp and clever jokester. I marvel at how he finds himself absolutely hilarious while in the same moment managing to be humble and self-deprecating.

He's had his phases and fads, some stronger and more lasting than others - from allosaurus and leptopterygius, (hashtag) all dinos all the time in those early years, videotapes, dino songs in the car, t-rex toys strewn all over. Then Power Rangers (me: pink, him: blue), Pokemon, Peter Parker, pogo sticking, Mario Kart, Halo, Vince Flynn thrillers, devil sticks, Batman, Foxtrot, Calvin & Hobbes, trivia, scary movies, "Scrubs," "Sherlock," "Always Sunny," our favorite Steph Curry and the Warriors of Golden State.

And the sports, duh - church league basketball with wood-smell bleachers, plastic gold trophies and the squeak of little-kid shoes careening down the court as parents cheered (or perhaps yelled?). Early Saturday morning soccer, metal bleachers and dewy cold grass, I layered in sweatshirts to watch him kick and pass and score a goooooallllllll. Springtime baseball, but only for a season, because he hated sitting still in the dugout or standing still in the outfield. And then in high school, he tried tennis and something clicked. He didn't look back. Restringing rackets, cans of fuzzy yellow balls for Christmas, Rafa and Roger, all fell quickly and easily into our family lingo. 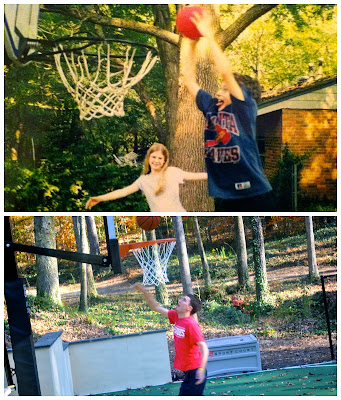 In between sports seasons as kids, we roller skated on our patio with short plastic hockey sticks, I would be Julie "The Cat" Gaffney and he might be Luis Mendoza, speeding as fast as he could, pretending to crash into the goal. I liked to pretend I could beat him in basketball, but he would easily steal the ball from under my nose and score with ease. He'll still chuckle as he recounts how I "tried" to beat him up, welling with big sister anger as I realized, hey, not fair! he's better than me.

When you're a kid you think of it as "better than," but as you grow you simply realize it's more a matter of being good at different things, and you begin to find awe in what this little curly-headed scrawny kid can do, and learn to do, and find joy in doing as he grows older and taller and deeper-voiced.

His discipline, putting down the Nintendo and picking up the tennis racket.

His intelligence, groaning over school as a little kid, then getting into magnet school, earning his I.B. diploma, getting accepted to his top college.

His compassion, deep love for family and girlfriend, friends, pets, a tattoo on his shoulder and place in his heart for the friend who died too young.

His sense of humor, always jolly and intact, his sarcastic edge so quick and clever, using it to tease and spar but also to make relevant points about the world.

His confidence, hunched and shy in the back row of little kids choir, by the end of high school singing a duet onstage in front of a sold out crowd.

His dedication, picking up tennis at the late age of 15, now a registered pro, leading clinics and lining up private lessons.

Sometimes I look back at the little boy photos and think, Can you even imagine who you have become? Some of it I could imagine then, some of it I certainly couldn't. He has always stolen the ball from under my nose, always amazed me on courts and off.

We got our driver's licenses on the same day. At 18 I was practically a driving spinster, while at 16 he was on exactly the right track. Even after I passed the test (with the caveat that I keep practicing my parallel parking), I still didn't much like to get behind the wheel. So for a couple of years whenever I was home from college he'd drive us around, to see our friends or grandparents, to church, to dinner. Come to think of it, whenever we're both home, he's driving. I got a kick out of yelling to Mom and Dad, "We're going, see you later!" and we'd take off on our own. We'd roll down the windows and he'd play me whatever new rap or mash up he'd found, cruising around our ironic version of the hip hop capital of the world. Back then it was Flo Rida, now it's Macklemore. "I think you'll really like this one," he said last year before playing me "Same Love" for the first time, justice even in his music choices. I always feel proud to be there next to him in the car, to be the one he's carting around, sharing the music, sharing the drive, the life.

We sit at red lights, bass vibrating, singing or silent, surveying the neighborhoods where we grew. He folds his lanky frame into the driver's seat, looking ahead with sharp eyes, bouncing his hands on the wheel. I look at him and smile, the baldheaded baby grown up, still laughing, still joking, and oh, with such a heart. 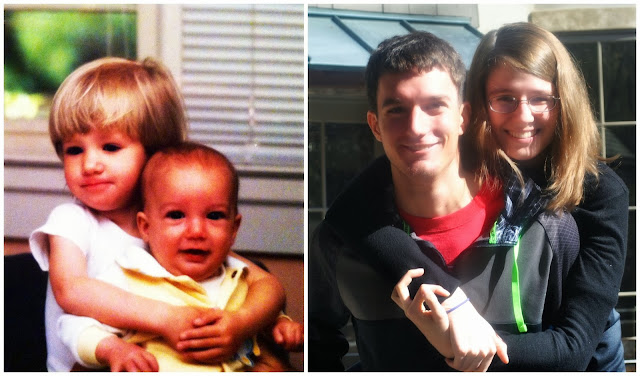