Mama there goes that man!

Steph in the zone!

THIS IS EFFING AWESOME

If you never saw Steph play at Davidson... well, it sort of looked like this.

Proud to call this kid my teammate at one point!!!

My timeline is going crazy for @StephenCurry30 and I love it!

The above constituted a mere sampling of the tweets prompted by Stephen Curry's 54-point performance against the Knicks on Wednesday night. (At least three of them are my brother's. He was 17 when he came to visit me at Davidson as a freshman and we watched one of #30's first legendary moments - his back-to-back threes against UNCG.)

I got home from dinner just in time to watch the fourth quarter, something I only knew to do because I had been checking Twitter to keep up with the Davidson/Elon score. Suddenly, Steph was raining threes and Twitter was raining Steph tweets.

There I sat, on my couch, by myself, at 10:30 p.m., whooping every time he made another shot - so not much has changed in the last six years. I heard my own voice echo through my little house, but I knew I wasn't alone. If we could have one of those cool world maps, y'know, the kind that shows how much electricity gets used across the world, and NYC is insanely bright and the Sahara Desert is pitch black? - well, we could make one for the noise made by Davidson fans across states and even across oceans when these universal moments bring us together.

Converge: (intransitive verb) To come together and unite in a common interest or focus.

Twitter told me that the team was barreling back home from Burlington, with the TVs on and tuned to the Garden. Watching a player who sat exactly where they were sitting, a player who knows what their lives are like right now, the life of a Davidson student-athlete preparing for the SoCon Tournament, that once chance to dance. A player who, perhaps, made them want to come here. A player who, though he never played alongside them, has come back for summer camps and games and 5Ks and season banquets and even classes. A player who made a home here and still holds it dear. Watching him sink shot after shot, watching him dance in celebration and point up to the sky, these guys know that he came from moments like the one they are in, late night bus rides after a gritty win. (And Steph Curry knows something about gritty wins at Elon, that's for dang sure.) 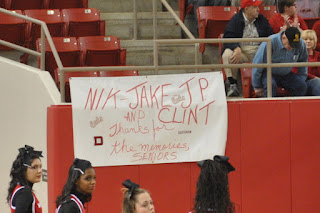 On Saturday we celebrated Senior Day, and four fantastic players who have truly made their mark on this program for years to come. They were freshmen when I was a senior. Their first season was the first without Steph. Both of those things made it a bittersweet season for me - I didn't know the program without Stephen, and I couldn't imagine what the future would bring for me after graduation. And it's wonderful now to be able to look back and see the journeys that have sprung up in the last four years, for all of us. I love celebrating what they have done. Coming into the program during what could be called a rebuilding year (and that would have been an understatement), these four have been leaders since the beginning. And not only have they broken school records and hung their hats at the top of nationwide stats and given us countless memorable moments on the court, they have grown to love this place as humans, as athletes, as students, just as we all have. They know it, and they love it, and come May 19 they won't let it leave them. They'll be there for future generations the rest of the way. I don't know them personally, but I know this about them. I just do. 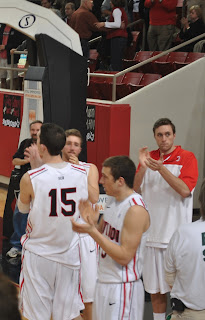 At the end of the game on Saturday, after the team had descended the stairs to the locker room, Nik, Jake, JP and Clint suddenly came back up the stairs. The four senior captains stood at the edge of the court, gazed out at the crowd, and raised their hands to the seats, clapping. Waves of applause echoed back to them. The players clapped and clapped, circling to acknowledge all the fans, to say thank you. And we thanked them back - because they get it. Because through uncertainty and tough seasons and hard work and success, they have grown, and shone. They have been loyal and supportive and uplifting, stalwarts. And whatever comes in the next weeks, we all know that they are something special.

Before the game, Clint Mann tweeted: Great day to be a wildcat. Senior day at Belk Arena. Bittersweet, but what a great journey.

And from somewhere on a plane or in a hotel during the Warriors' East Coast swing, Stephen Curry tweeted back: Congrats Clint. Finish out the year strong.

We are a family. Don't ever doubt it.