Ode to a handshake.

It began with a handshake two Februaries ago.

Actually, the funny/crazy/fascinating fact is that it began long before that, because we were on the same campus for four and a half years and had passed each other by countless unnoticed times and glazed-eye mornings and it reminds you that things begin to begin before you understand, so, okay...

It began began with a handshake.

A fleeting moment that I didn't know would change everything did change everything, for the great and the good and the mundane and the magnificent, and I feel funny writing about it now because it feels so fuzzy and far away and we feel different now, close-knit and clear-faced and bear hugs and red beans and rice, it's almost like I was shaking hands with a different person than the one who shares my life now because, well... It was an introduction. A beginning. And do you ever really know it all at the beginning?

Of course, from the beginning, I knew your smile.

I was in the midst of my first year out of school, a year that broke me apart and then pieced me back together, slid me into place - okay, maybe not into place, but into a place, a place where I grew comfortable with chaos, a place where the only clarity I had was that I was not clear, not at all. This was my life, this loose yet limited space that seems almost a secret in its existence, because there was not a class on it in college and there was never a follow-up e-mail to alert me that I had completed it, that I had passed whatever trick question test this was supposed to be. Official beginnings and endings had left my lurching life.

And yet, still, there came this beginning.

It walked into my settled madness, wearing your quiet confident stride, because you were this beginning. Your smile, your warm handshake, a brief introduction by a mutual friend as I walked out the door into a cold starry night. It was over in seconds. Even then I didn't know what it was. But it began that night, it did, and dripped sweetly into the following weeks - the slow sudden tumble of new friendship and shy true smiles and yes, Facebook friending, and the phone number exchange we still joke about, and the yellow daisies waiting for me in the car. And now, levels and layers beyond, it goes on. The journey of getting to know, and knowing, and known.

It began and it begins and it will begin again, and we are within it, you and me, and I thank God for you, and I thank you, thank you for that beginning. 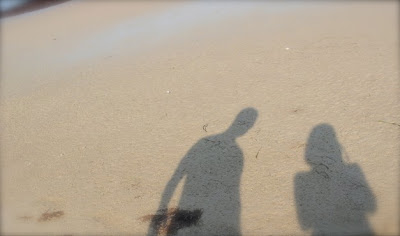 Posted by Claire Asbury at 8:51 AM
Labels: ordinary goodness, relationships

And you KNOW how much I love this! :)

beautiful. so poetic and thoughtful