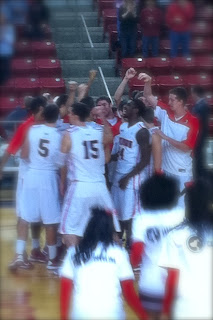 I love the energy and hype of Davidson's Belk Arena in games like Saturday night's, when we played Charleston and won and people were buzzing and cheering and I yelled so much that at one point I was cheering for defense until I forgot we weren't on defense anymore, oops. 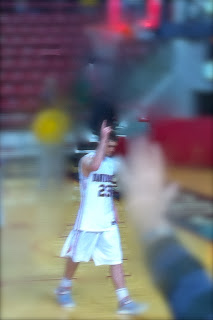 I love seeing family in action, from the bench to the stands. Our team is a team and our community is a community for more than 40 minutes on a court, because we have grown to love this place, and this place has in turn given us growth and love. That's why we come; that's why we come back. I had coffee with Mary before the game, and she is in the midst of it all, and she knows how special it is, and I love that people keep stumbling upon it for their own reasons, and staying because of what they find here. I love seeing former players in the stands, like Will Reigel and Andrew Lovedale and Thomas Sander, the stories they created and how those still hang in the air like the yellow banners in the rafters. I find it magical, how flesh-and-bone humans can in only seconds form floating moments that line a heart with sparking spilling over memories, beauty never forgotten but also never fully held after the initial experience. The memory of experiencing the experience... okay, maybe I'm getting too meta up in here. But it's the stuff of life, this mysterious interplay between the solidity of humans-in-motion and the meaning of what they do with the motion, and what it does to the world, cause and effect, problem and solution...

And so often for me, this team and this place have been the heartbeat of what I just stumbled over explaining, a living, breathing example. Solidity creates fluidity creates life? A layup creates a crowd's roar creates a legend? A rebound creates an epic run creates a way for the children of Nigeria to have new life, and gives new lease on life to all who get involved... 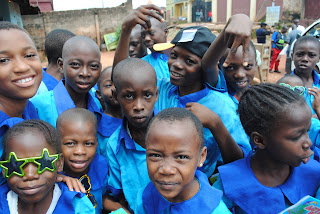 Last night, the fifth annual Kicks From 'Cats fundraiser, brought Andrew Lovedale back to his Davidson home to represent his country that is home, and the children he dearly loves there. Five times now, this community has rallied to give shoes and support, to be part of his desire to give them warm shoes, meaningful schooling, deep faith, and active bodies. 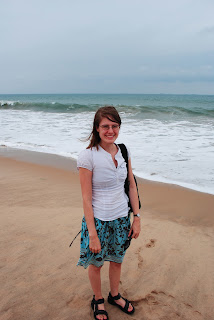 I have been on both sides of the ocean; I have gazed out at the Atlantic from the edge of the Carolinas and from the beach in Lagos. And it's amazing to think how that experience, those ten days in Africa that nearly two years later I am still trying to fully comprehend, began to stem from moments in Davidson. Such small things can spark life-changing adventures.

As much as I think about it, and go over it here on paper, as much as I write about it and marvel at it, I don't think I want to ever truly understand it, not that I could. I savor the wonder that comes with the "thin places," what the Celts called the moments when heaven and earth seemed to be almost touching. 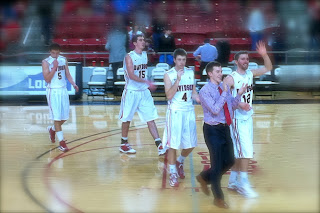 I love that there is a name for such a concept, such a place, and I can only imagine that here "thin" also means "full." Bursting with joy brings us to a point - perhaps not a breaking point, but a point of truth, perhaps inexplicable in words, where everything makes sense and yet is just as easily etched in mystery. I'm getting a little tangled up in my thoughts, but I think of the seven years I have spent here, the hundreds of games I have witnessed, the names I have yelled and the folks that have come to mean so much to me, the love I have found - and all I know is that this cozy wooden arena, so full and thick with people and smells and music and emotion, is a thin place all its own. 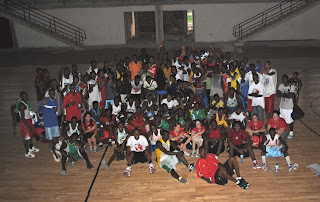 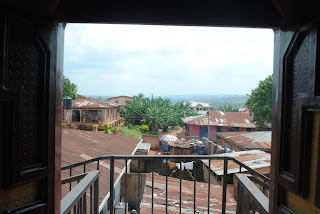 And I think of our final night in Nigeria two summers ago, when we all stood in Pastor's Ben's living room after dinner, our team - Andrew's childhood friends, the women from the church who had so lovingly prepared meals for us, our security guards, our driver, church members who had volunteered with us all week. We stood in a circle and Pastor Ben sang and prayed over us, and anointed our heads with oil, not only those of us who were traveling back the next day, but everyone. As the oil shone on our foreheads five thousand miles from that cozy wooden arena, and we raised our voices in song, I felt the magnitude of all our hosts had done for us, the friendship and connection we had found here. Two worlds had indeed collided. Which one was heaven and which was earth I could never tell you, because both have stirred the human and the divine so deeply into my soul.
Posted by Claire Asbury at 1:57 PM
Labels: Access to Success, Davidson basketball, faith, Nigeria, ordinary goodness