What I wrote on this blog 5 years ago today: 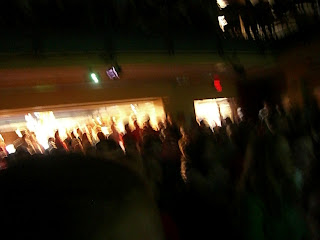 And I hope you can tell it changed my life.


so you know how there are times in your life where you are in such synergy with everyone else in a room that it is just awesome? well i have had a couple of experiences like that recently but since it is so late i will just talk about today's. davidson went to the first round of the NCAA tournament today, and we lost to maryland. but we totally rose to the challenge and were winning for much of the game, and had a 1-point gap for the majority of the rest. we totally deserved to win, but things fell apart at the end. but in that first half and the first few minutes of the second half, holy shit, i believed that anything was possible. we were all sitting in the 900 room, profs cancelled classes, everyone grabbed something to eat and went in there. we got seats in the SECOND ROW! and it was amazing to see our guys on tv, the guys that we have watched play in OUR ARENA, the guys that we see in the halls. it was effing awesome. they completely held their own, steph hit the 3s, will did too, andrew blocked like crazy, j rich took em down, oh my god it was excellent. i was screaming the entire time. when we were winning by 8 FREAKIN POINTS it was like, "we can actually DO this!!!!" i feel like in the back of my head though, there is always a sense of the forebodingness of not following through. it probably comes from being a druid hills soccer fan. but oh my lord, it was intense. everyone was murmuring, and then when something big happened, we all jumped up and screamed. we did the defense cheer, everything, we yelled at our guys even though we knew they couldn't hear us. there was a point when mickillop just GRINNED and that was amazing. AHHHHHHHHH WE DESERVED TO WIN!!!!!!!!!!!!!! maryland really didn't play very well for a big ACC team. they did have 3 seniors starting, and they are definitely bigger than us. we just made some errors in the end that we should not have made, but they played mediocrely throughout. DAMNDAMNDAMNDAMNDAMN!!!!!!!!!!!!!! but it was so mindblowingly awesome to be in that room with all of those people just yelling their hearts out, not caring about anything else. ahhhhhh community. that's what i love. mad props as always. bitterness still lurks... but NEXT YEAR!!!!!!!!!!!!!!!!!!!!!!!!!!!!!!!!!!!!!!!!!!

5 years! you are great, keep going.