"Sanity has flown out the window, into the night."

Those are Jessie’s words, and they flash across my screen all the way from 5:15 a.m. Berlin as the buzzer signals the end of the first overtime, where my heart is still teetering around the rim of De’Mon’s last second shot. I cannot respond I cannot speak this can’t be happening can’t can’t can’t everything is blurred numb wavering falling. Any sense of logic, of you-don’t-lose-a-12-point-lead-with-2-minutes-to-go is drowned out by hundreds of purple-clad kids shot up with frenetic underdog swag. Their shrieks of glee are worse than nails on a chalkboard.

I clutch and claw at it, a question that has never been more unbearable, more unanswerable, that in fact has been dangling devilishly from the rafters for hours but it’s the only thing I have to cling to, my only known is this unknown. Extremes win out: I’m tuned in and sharp, zoned out and fuzzy. The air is more than oxygen, pulsing and clashing, frozen and fiery. Unhinged possibility is pent up within physical parameters: floorboards, rafters, walls, such a lethal combination, boundaries unbound. Western has played off it all night; any time I think we’re about to escape, they’ve reeled us in.

I clap and curse with abandon and disregard for propriety and society, propelled by the pounding urge to control what I absolutely cannot, logical thought sears BUT WE DESERVE THIS floating furor takes over, I’m scattered enough to lose my cool and centered enough to understand that my heart is potent, that underneath the tinge of madness is a surge of meaning, of purpose, of home.

Seconds strain, and so do I, pulling myself inward, stiffening my throat and quieting my mind, trying not to feel what I fear, living within the unknowable, willing myself to watch without care. It doesn’t go well. When we pull ahead, my heart LEAPS as if I’ve never considered the possibility of a win. When they find some way to tie, I crash, losing it all. Faith? I have it, God, I have it, boys, I have it, Coach, I swear, but, maybe like all faith sometimes, right now I can’t quite grab it and hold fast. Because having full faith also means that I would have to have faith in a loss. Comprehend it, believe it, accept it, walk forward and hold it in my hands. Loss. What do you do with faith when it crumbles the ground beneath you? I still haven’t figured that out in life out there, away from the buzzing brimming Civic Center, and right now even this feels like too much for me to handle. The staunch facts of history, the fleetingness of mystery, all fall before us step by step, and I await the stumble.

“This is fun,” William says next to me.

Or, you know, it could be fun.

It has been fun, of course, I’ll admit even in this shock of an ending (or, not quite an ending – the beginning of another ending? CANNOT. TAKE. THIS.) – this night of familiar faces, of blazing energy, of warmth and the smells of popcorn, polished wood and the squeak of soles, has been all of what I love about this sport, this school. Moments have piled on top of moments to create this wild tale – hell, I was flipping out when we were down 18-30 in the first half. Thank God the boys know better. Threes won’t fall? Fine. Rebounds, blocks (Jake with a cool SEVEN, what up!), De’Mon’s hook rises and hits with such easy power and grace, I am astounded and unsurprised every time. Nik and JP are all ice, patience and smarts inside the arc, muscle movement just knows what to do. Chris has been a savior in the OTs, feed the Swede indeed, furrowbrowed and fearless. Tom and Tyler guard tight, eyes wide open on defense. And I just love watching Clint Mann pound his hands to his heart and hold up his jersey, the letters bold and clear, DAVIDSON, I love watching him score, I love –

I love watching him slam the open dunk home without a sliver of doubt.

I love watching him wrench down the rebound after Western’s clanked trey, and pass it to JP.

I wait for a whistle I wait for a bump I wait for a trip-up or a steal or a stop and nothing comes. JP takes it down court with his eternal poise, then suddenly hurls the ball upward as if it were weightless, a weight has somehow been lifted, he’s running, they all are, their contained courage explodes –

In the midst of screaming and spinning somehow my brain transports me back to a gray, rainy Sunday in late November of 2009, when I raced back to my senior apartment from church to read the in-game thread from Davidson’s third and final game in the Charleston Classic. We had made a comeback and lost to Penn State by two. 57-59. We came out of that tournament 0-3. We started two freshmen, J-first names, K-sound-last-names, #15 and #5. We sat another freshman on the bench, another K-sound. We had picked up a transfer from Iowa State, suited and tied and ineligible his first year as a ‘Cat, but always up and clapping. We had no All-American. Like it or not, the past was hard to escape. Lord, even 57-59 hurt to look at. Nothing was set, nothing was known.

I remember that dreary day because it felt so unlike what it should be. What I’ve learned since then and feel like I’m evening learning AT THIS VERY MOMENT, as I hug complete strangers and tear a stomach muscle from screaming (well, it feels like it) and squeal with joy watching their celebration, is something I probably should have complete grasp of by now but I think it’s always hard:

The story is the story. Live into it. Follow where it goes, breakdown sorrowful or soaring sweetness. Those minutes where nothing is known? Exist within them.

(Gosh, @michaelkruse would be so proud of me!)

I know this would all be harder to say if Cole’s shot had gone in, if I was heart-dropped and drained. I probably wouldn’t be saying it. But I hope I would be saying something.

And now, here we are, in this Moment.

This is a Moment for Carol Quillen, in her seventh month as college president. During the first half, she joined her students in the stands to cheer for her students on the court. “I know she’s been here for awhile,” Ray writes later, “but I consider that moment to be her official inauguration.” No processional or trumpets here, but simply a gesture that shows her character, her sense of light and fun, her belief, her devotion to us, whom she has claimed so earnestly.

This is a Moment for Will Reigel, team captain, as he leaps over the bench and grabs Brendan McKillop in a bear hug. Brothers of a strong sort, their ties to this place are rooted deep within their families. 2008: freshman Brendan. 2012: senior Will.

This is a Moment for alums, all of us – and fresh alums like Phil and Ray, mouths gaping in pure bewilderment. Phil, aka the Cat in the Hat, visited campus the day of our home loss to App State in ’07, winding up in the front row of the endzone as a prospy. Ray stood next to me on March 21, 2008 in the upper reaches of the RBC Center. Think about those contexts, and then hear Ray’s words in this moment: “I have never wanted to cry after a game more.”

This is a Moment for Morgan, whom many of you probably recognize best when he’s wearing his lobster claws (Before the game, a grown man exclaims, “You’re the White Lobster?” and looks a little starstruck as he shakes Morgan’s hand). He’s in street clothes tonight (the costume is bad luck on the road), and unabashedly wipes tears from his eyes. “I’ve been crying for the last ten minutes,” he says. He’s a senior, you know, and all I can do is say over and over and over that I’m so flat-out glad for him, for his friends, for these joyful, dedicated students that have created a Belk experience all their own – they’ve made t-shirts and signs and dress up as lobsters and rabbis and popes, and they just have a blast. And now, they get this.

And so much, so much, this is a Moment for our team, their faces washed through and through with newness. They come to the students for a victory lap, beam-bursting with fire and thrill, slapping hands and getting hugs. I’ve known their faces for awhile now, but at this moment they are each completely fresh to me. They climb the ladder one by one, eyes glazed with dream and sharp with reality. Right now, the two are very much one. I’ve never seen scissors handled so tenderly, never seen a mesh net held with such care.

I leave with Sean and Jamie. We walk across the emptying court as Kilgo signs off, his sandpaper voice a remnant of the electric edge that’s now given way to result, relief. “The dog came out, and folks got nervous…” He waves to us. I give Billy a hug. Ray Beltz is crouched in the corner on the phone, wearing a worn-out smile. Mark closes up shop at Live Blog Central. “My fingers were numb,” he laughs shakily, shutting the laptop. Matt McKillop is still shaking his head. “I nearly fainted at the start of second OT,” he says. “I was like, ‘Okay, guys, let’s… aaaaand I need a Gatorade.’”

We pass Cathy McKillop in the parking lot of the Doubletree Hotel on Hendersonville Road, mid-sentence on her cell. “— drama,” she explains to her dear one on the other end. Then, spotting us, she beams. “Right?”

In the Doubletree ballroom at 1 a.m., all we can do is rehash with still-stunned relish. William’s son, who tends bar in L.A., texts to say he had his customers screaming for Davidson. When the buzzer signaled the end of regulation, Jeff says, he saw Nik and JP quietly slap hands. Define: calm, define: brothers, define: Davidson.

Coach speaks at the podium, hoarse voice strong and shining. I catch Angela’s eye through the silent crowd. She’s a student, another senior who has stuck strong through every single bit of the last four years. “We have family,” Coach says, and I see tears sparkle on Angela's aching-grin cheeks, like diamonds. 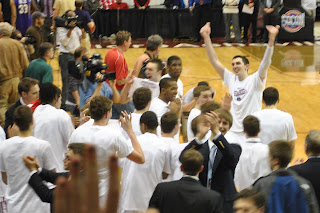 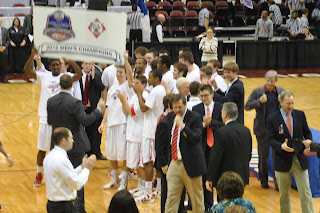 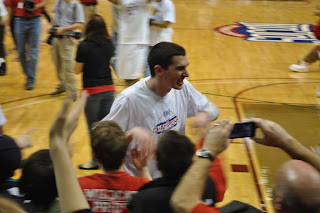 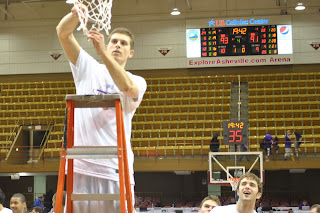 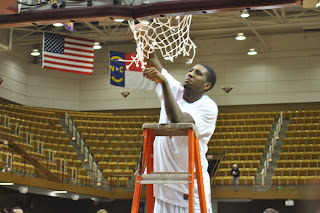 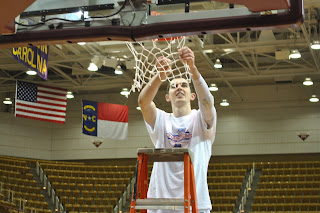 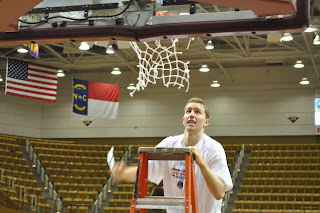 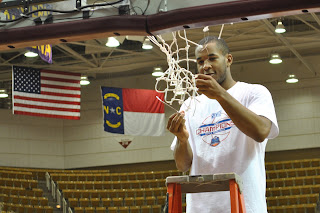 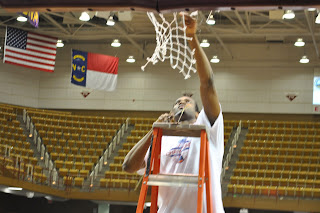 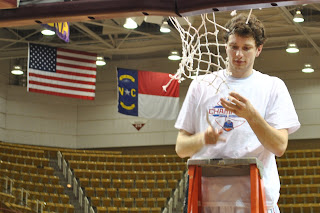 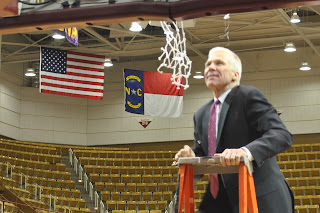 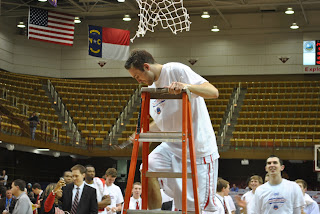 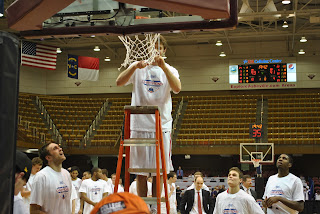 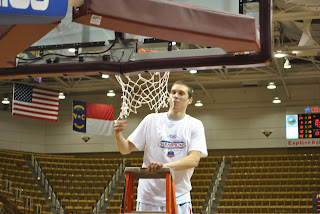 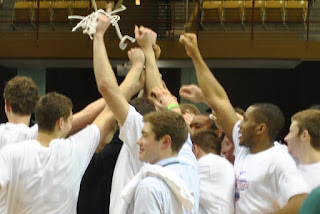 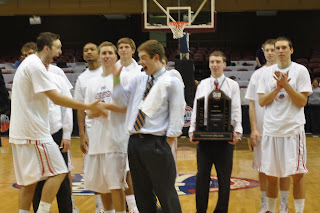 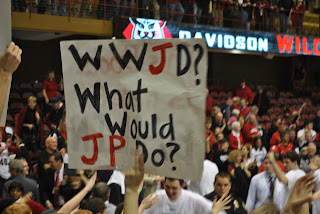 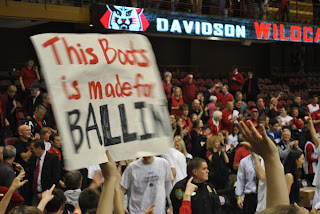