Friday night was the first time during this bathwater autumn that I actually felt stingingly cold. The sun slipped quickly out of reach and it was only 4:45. My Heels-devoted brother had already been texting me suggestions of who to heckle. 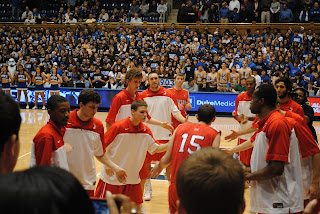 Earlier that afternoon, about forty miles outside Durham, Wildcat flags lit up our rearview mirror. They (a father and son?) waved. We (a father and daughter) waved back. "Just imagine," my father mused behind the wheel, "all these Davidson cars converging..."

With plenty of time to spare, Dad and I ambled through parking lots, my hands stuffed into my pockets (this was also the first Glove Outing of 2011), until we reached an old Gothic castle that apparently also houses a basketball court. Ten minutes before we could go in. Canned music from the soccer tournament buzzed nearby. I gazed around and watched hot breaths steam into fresh air, as more and more sweatshirts and hats showed up bearing that blueberry four-letter word. I fluffed out my scarf -- a brilliant, fire-tree red. 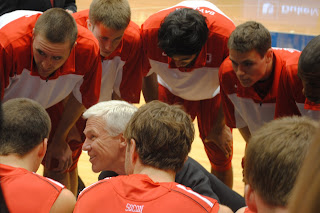 Home is extra-cool when it shows up out of nowhere. As the doors opened, familiar figures and faces flew down the stone steps to my left, Duke grad students decked out for Davidson. Katie, freshman philosophy. Emily, Monday night fellowship. Robert, whose cousins grew up with me. Andrew, fellow Lilly fellow. Ruthy, flickerball coach, and front row of Belk, and fan on top of fan on top of fantastic. Hugs, cheers exchanged in the rush.

Here was my favorite part of the night -- besides the WL and the Pope, besides Faheem's #occupycameronindoor sign, besides the Crazies trying to be funny with signs like "Who is David's DAUGHTER?" (um), besides Stephen showing up in a half-cat-half-devil jersey behind our bench, oh yeah, and besides the fact that we were up one at the half -- here was my FAVORITE part:

I so wish I could be there screaming my head off with you! Cheer extra loudly for me, that way I'll be there in spirit!! 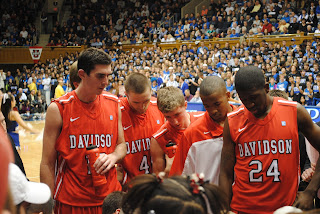 are you at the duke game right now?! which one is droney? czerapowicz?

Tom and Chris, both more confident than I've ever seen them, and Tyler, showing glimmers (and a nasty curryesque dagger that I swore would NOT go in but then it DIDDD!).

Aaahhh!! Haha I totally think we can do this. Also Thomas Sander is here


the boys are looking pretty good tonight! first time i've actually gotten to watch, which makes me unbelievably sad. miss you and davidson bball TOO much.
De'Mon, battling, deep breaths, pushing forward. Clint, breaking away for an uncontested DUNK.

what does Clint have on his face?


GO WILDCATS! Oh i haven't been this excited about a davidson game in awhile. cheer hard for me please 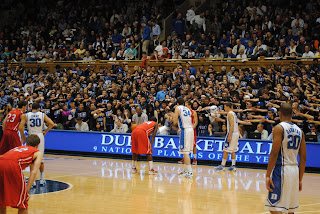 Phone. Buzzing. All. Night. Love. It.


I jumped, and screamed, and muttered, and accidentally hit the guy in front of me multiple times (and apologized, but damn it, we were squished!), and realized that beyond anything else, this game was a return to possibility. To alive-ness. To understanding (again) that the story is going to write itself and we have to fight and sing and love the ride, through fifty states and over oceans.


Later, back at home, my first and oldest friend sent me a message from Washington, DC:

I do believe an intoxicated individual is currently screaming something about the Wildcats and singing "Sweet Caroline" outside my building. Thought you should know.

In the midst of the pre-game madness in one of college basketball's most historic arenas, my father and I chewed Chick-fil-a and took it all in. I don't remember what sparked him to say it, but suddenly he opened his mouth and spoke: "Thank you for going to Davidson, Claire."
Posted by Claire Asbury at 7:08 PM
Labels: Davidson basketball

my text made it in! ... and no matter how rusty you claim to be, you still manage to hit the nail on the head every time :-)