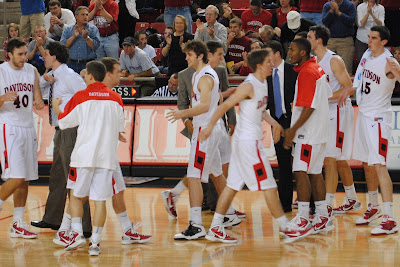 To state the obvious: it's weird going back to Davidson. On most parts of campus, as much as I love it, I don't feel quite right. It is no longer my everyday home, underclassmen eyes look at me and see a stranger, if they look at me at all (after all, they're so busy), upperclassmen eye me awkwardly (uh, do you still go here?); as much as I cling to the idea that the physical space knows me in facets and forms even I can't name, the people are drifting away.
*

But then I walk into Baker.
*

I do not feel uncomfortable here. I feel good and homey and known. Sure, I feel a pang going to Will Call instead of having my ticket folded in my pocket, and I ache a little watching the endzone from my sideline seat --
*
But then my favorite ticket lady, who stood behind us all last year, beams and pats my arm and scans me in, and Morgan is there to give me a hug before he goes down to the front row, and I stand behind Jess, the rail separating me from her place in the last row of the endzone, and I tap the fight song rhythm on her shoulders as I sing and the boys pass and shoot and squeak their shoes and warm up to the brass. As I head to my seat next to Cobb, D-Block bounds in, first home game of the year, let's do this thing, red wifebeaters and Santa hats and pink cheeks, "BOB MC-KILL-OP!" and I laugh because there is nothing like this place. And when the National Anthem gets us on our feet, I think of my friend Joe on his ship, and when the boys are announced to a rap song I don't know yet (I'm sure I will, "Cyclone" and "I Can Transform Ya" are now vividly associated with brightly-lit Belk), I realize I can see their faces better from here -- I see determination, I see this team becoming theirs, Jake's face is etched with fierce proud claim. I ache for the rush of jumping and roaring for the tip off, I'm amazed that none of these kids were there when I first stood there, and no one I first stood with is there now. It passes and it moves, the story does. D-Block's cheers remind me of Detroit, everything from "ooh, ahh!" to the "dun! dun! dun!" that bounces Sweet Caroline along. "HE'S A FRESHMAN!" Droney, "HE'S A FRESHMAN!" Downing. Frank's massive tree trunk blocks slap the crowd awake and I feel suddenly like we could do this, this could be it all the time, this energy and madness and pride. Brendan shoots his slump out of the water and I yell "THANK YOU!" every time, not simply because he's putting points on our board, but because he needed it and I wanted him to have it. JD has a couple of pull-up jumpers and a gorgeous floater that goes slow-mo, and I'm reminded of my classmate who did that too, regally lifting the orange to the net, an offering, sleek and smart and glinting with grace.
*
At halftime I take the steps two at a time down to the Den, four thick lines of people waiting but I don't need food, and I catch Pam's eye and she motions me back behind the counter to give me a hug. "What d'you need?" she asks, one arm around me (and I'm reminded of the time last January when I busted my finger during a comeback and had to ask for ice). "Nothing," I say, "I just wanted to say hey to you and Big John." "John!" she calls, and he ambles over, grinning, and two of my favorite people, who memorized and made my lunch order nearly every day for four years, are my friends, are still important. In the midst of the chatter and bustle and popcorn and Coke, they are here, and it matters.
*
I go back and sit with Christie for a bit, and meet Hannah's dad, whose eyes smile like his daughter's. I go back to my seat and Kilgo's on press row in front of me, feet planted firmly and his sandpaper southern voice that I cannot hear, and Bob C's one row behind me, with one earphone in so he can listen, the sandpaper floats in an arc above my head and so I know it exists. And somehow, out of everything, it's "Sugarpie Honeybunch" that tears me up slightly, for no real reason, some heartstring got hit, and then I think, I am here, change has happened -- I'm 23 and 9to5 and section 13 -- but this is this, polished wood and peopled warmth, pushing towards winter. Morgan, Jeff, and Logan are dancing in the front row. JP is running downcourt, twist slip shoot. Dick Sanderson is watching in his corner, to my right. I text my father. Cobb and I talk like old friends because I realize that we are old friends. WR and his son, who I could probably pick out of a crowd from resemblance, sit across from us. Gracie's with her dad. Jessie and I exchange glances and laughs like she's next to me, half an arena away. The points add up. The doubt fades. I gotta feeling, and it's good.
*

Fifteen minutes later, the pub is dark and familiar and the circle of people is easy to join. I know them now. Mingled family, conversations hilarious and nostalgic and meaning-of-life-serious. And I think -- this makes so much sense.
*

This December 1st marks four years since I stepped inside that little arena on a Friday night with my girlfriends, having just turned in my first final paper of college. Davidson vs. Elon. I don't remember why we decided to go instead of watching a movie in the lounge. I don't remember why we sat where we did, towards the back in the middle of the endzone. I don't even remember getting tickets (although I bet it was at lunch that day). I don't remember the starting line ups that I can now spell out, intonation and all, by blazing memory.
*
No, what I first recall is the surround sound of voices, my peers singing and jumping to a tune I'd never heard before (a tune, alas, that doesn't express itself very well in mere print):
*

That is what I heard, that is what I remember, and something clicked. This energy, desire to create energy, to be part of something bigger, deep and full, to join voices.
*
This makes so much sense.
Posted by Claire Asbury at 1:23 AM
Labels: 20something life, Davidson basketball, transitions

Good writing, as usual, Claire. I am more than a little bit jealous. I need to find a way to move Baker closer to the beach!