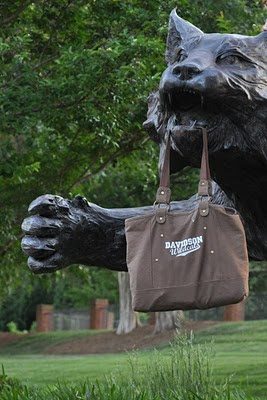 I thought a lot about names this weekend.

I mean, your name is always your name, one of the first things you learn in life, but when do other names start to matter to you? When do the baby name books and random genealogy of other families create names that are one day thrown into a context where they become significant?

We come into contact with tons of people and have thousands of experiences that enrich us and take us in some direction, and so often we can't see the trail until we've been walking awhile and decide to turn around. It reminds me of Wendell Berry --

we travelers, walking to the sun, can't see ahead, but looking back the very light that blinded us shows us the way we came...

Yes, that light. That one.

Well, to back up, Will and I went to Chick-fil-A for lunch on Saturday. Now there's a name for me. His blog on Davidson athletics when he was a student was one of the first tangible things I remember about wanting to feel involved and invested in the basketball program, sensing its importance and what it could mean. Hey, he's a student, and he can do this. He writes well and keeps this up and people read it. He cares about this. Over three years later, he thinks it's crazy that I remember what he wrote back then. I do -- because in its own subtle way, it pushed me forward into what Belk Arena became for me. And, way on down the line, step after step after step, it gave me his friendship.

But before we even got out of the car, Will's phone rang. We both just kind of stared at the name for a couple of seconds, and then Will picked up.

Steve Rossiter?
You just saw us pull in from your spot in the Chick-fil-A drive thru?
Uh, at Exit 25?
You're in town for the game?
See you there?
All right, man, sounds good.
Names. They take on meaning (a senior captain from Staten Island, New York...), they fill up with history and memory and move from the past into the present.


Will and I walked the back way to Baker, and as we rounded the curb into the lower parking lot, a lone figure stood in the cold sunlight, squared shoulders, silver hair, suit and tie. Waiting for the season. He saw us coming. He smiled. He asked how we were. No names were spoken, but we know his, and he knows ours. The three of us are in different places in life, we came here through different avenues, we play very different roles; and yet, we stood there on the cusp of an unwritten 22nd chapter because this place has given us gifts that our hearts still cannot quite name.

I wove my way through the lobby, my feet moving with restrained familiarity and my brain struggling to understand the shift that has taken place in the nearly-nine months since I last came through these doors for a game. I stopped on the steps. "Sink!" One hug. I stopped by the door. "Carrie!" Another. Before finding my seat across from the bench with Cobb & co, I stood behind my student-spot and just took a moment. Morgan came to stand with me, White Lobster from the neck down, carrying on a name, keeping alive the legend (and the little kids' photo requests haven't stopped -- Bryant, be proud). Carrie took her place -- our place -- in the last row, and I tapped her shoulders. I met her, one of my best friends, now a senior, in the cloud nine frenzy of Wisconsin, her freshman spring.

I started consciously thinking about names when it hit the starting lineups. How many Davidson starting lineups have I heard since December 2006? Position, class year, hometown -- NAME. Towns become synonymous with players (Barrington, IL, anybody? Falmouth, ME?). Players move and learn and grow, they give us moments that we will talk about for years, they establish themselves; we say a name, and you just know. (Sander: charges. Max: D.) I am almost hyper-aware of this aspect of history and time now that I'm far enough into it to own the years that were mine, and it intrigues and moves me: watching this growth, watching this story. These new boys coming in to play their first collegiate minutes will one day come out of that tunnel with their parents by their sides, and the names their parents gave them will explode the crowd into cheers.

We don't know when, we don't know why, but not only will they claim their own names, they will claim ours, they will claim this college. That name on the front of their jersey will represent not only their team, but their best friends, their professors, their late nights, their number of Outpost quesadillas. I sat and steeped in this new phase of my Davidson identity and yelled these new names -- "Go Jordan! Come on, Tom! Let's go, De'Mon! Yeah, Clint!" -- as easily as I used to yell for those of my own class.

Because boys, you'll get it. And you'll be where I am one day, too.

How does a place come to know you, how does your name take on meaning, how do you come to cherish other names? How does this work, day after day after day? Part of me feels it's a mystery that I can never quite grasp, and then I realize that it's simply life pulling me forward, showing me who it can give.

It's a season full of new names. My fifth following this team, my first out of the endzone. Games to play, kinks to work out, introductions to make. Don't know about y'all, but I'm ready for the adventure.
**
(PS. Post #1,400.)
Posted by Claire Asbury at 1:12 AM
Labels: Davidson basketball