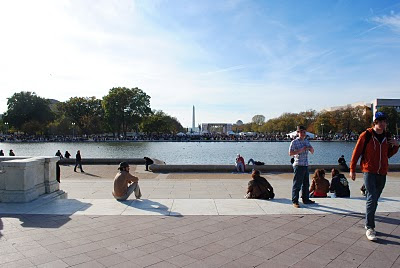 Last weekend, I took full advantage of my new no-homework life, pulled a true twentysomething, and went up to Jon Stewart's Rally to Restore Sanity on the National Mall. I went because it would be an adventure, I could see friends in DC that I love, and because, introvert-at-heart that I am, sanity is something I highly support. In this instance, I specifically support the idea that most of us in this country do not think that screaming across the barbed wire of extreme partisanship (on either side) is the best solution to anything. So with a twinge of regret that I would be sacrificing what could be a restful, lazy weekend, I hopped in my car, drove to Durham, and crashed with Julie and Donita for the night. (Question: what does it say about me that I hit the mattress at 9:45 but couldn't fall asleep until past midnight? Dad-genes + college = old habits die hard.)

We left the house at 5:19 AM and wound up 85 North in that bizarre dusky-dawn time of morning when your body hasn't seen the sun but can't see the stars so you drift in and out to the lull of the heater and the engine's rev. We listened to the BBC discuss the American elections, and I was mesmerized if nothing else by the way the reporter pronounced my religious affiliation, "Christ-ee-an..." and somewhere it blurred in my mind that two years ago another election was pending and I was across the ocean waiting for it...

News, top of the hour. "Thousands are expected on the Washington Mall this afternoon..."

Sunrise burst around 7, and when I blinked my eyes and glanced back, I saw the old Richmond train station, its clocktower glinting at me in greeting. Hey there, friend. Passing through? Richmond? RICHMOND! We pulled off the interstate at Exit 85, and poor D & J must have been concerned for my mental health because I shrieked and giggled to myself with every turn of the tires -- River City Cafe! BROOK ROAD! PARHAM ROAD?! We stopped at the 7-11 at the corner, my gas station from June to August of '09, less than a mile from home and friends (and adopted dog!), and I stood in the parking lot and breathed and beamed. Summer09 summer09 summer09, how can I so suddenly be within a place that knew me and grew me in such a specific period of time? It's like this magical universe that I should not be able to reach so easily, and yet without even trying, here I was. These exits that take us to gas or food or rest stop, these suburban sidestreets that we forget about once we're back at 70 mph, each one of them is magic to somebody.

Two hours later our ultimate roadtrip purpose began to fall into actual steps. Step One: retrieve metro tickets from the Van Dorn Street metro station in Alexandria. The buzzing line extended into the tunnel, signs and Halloween costumes rampant. Families with backpacks and lawn chairs, college students with masks and sharp-sloganed tshirts. Sizes, shapes, colors, all. A teenager hummed the "Pirates of the Caribbean" theme while he and his friends bantered and waited. Behind us, a father talked his son through the farecard process. Good thing we got here early. And then --

Facebook had told me Imani was going, and so yes, I knew that Imani would be somewhere in the crowd of thousands along with many other friends of mine, but no, Facebook did not tell me that I would be standing in line with Imani waiting for metro tickets -- two girls who shared a hall freshman year of college, who shared a stage one May morning six months ago, now sharing a Saturday morning surrounded by strangers. "Oh my gosh!" I dashed to hug her. Less than fifteen minutes later, I elbowed Julie and looked up front -- "Is that Larissa?"

She looked up and saw her classmate. "Whoa -- yeah!"

I am constantly dazzled by the world and its timing.

Dazzle mixed with dread when Julie made an executive decision and pulled us onto an already brimming train. "It's okay -- we can get you on!" someone called as I squeezed inside. With every stop we were pushed farther back, and became fast no-name friends with the five or six people nearest us. Chatter mixed with oofs and grunts as we steeled ourselves against the squealing brakes and laughter hummed as we got closer and closer, Arlington Foggy Bottom Farragut West Metro Center Federal Triangle... we took pictures of the metro mob on our cameras, we examined the metro map on iphones, "L'Enfant Plaza," the guy in the corner told us, don't get off at Smithsonian, "wait for L'Enfant Plaza." A local woman chuckled loudly as she shoved her way out, her typical morning routine invaded by thousands -- "Y'all stay together!" she called back to us as the door closed on her laughter, and we echoed her. Ha ha.

We had gained a posse as we finally hit solid ground at 11:45, consisting the five or six others who had occupied our corner, and we moved together, no questions of who are you? but simply making sure we were still together and which escalator do we take and what's the fastest --

Stunned gridlock in line for the escalators, all of us with the continued quest to capture, cameras held aloft as we marveled at -- well, at us. Ourselves. How can there be so many of one species in one place for one purpose? How does so many of me -- eyes ears nose mouth limbs -- exist?

Escalator -- finally -- 11:55 -- blue sun cold breathing room DC, DC! Nikon slung around my neck and people people people street vendors, merchandising it, branding it, this rally thing started and suggested by one person but it's suddenly not an idea or a concept or a storyboard, it is human beings. A couple months ago, I sat on the couch in North Carolina and watched Jon Stewart announce this event. And here it was, living, breathing, squished between monuments with a mind of its own. 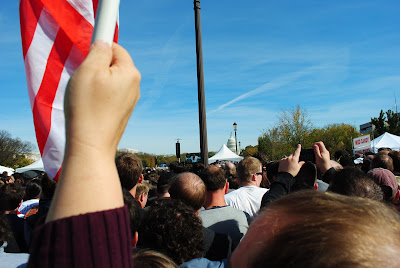 We were four blocks back. We couldn't see squat -- at a certain point, even "jumbotron" becomes a relative term. I had my bag over my shoulder and my boots planted firmly on the concrete. Aches started to creep in. Any way I shifted or moved -- or didn't -- I bumped someone on all sides. Cell service cut out and I prayed my parents knew I wasn't being trampled. Every so often we'd hear a call for "MEDIC!" or "someone sick over here, coming through..." and even more often folks tried to swim upstream without explanation, but their eyes just about said it: holy shit too much too much. 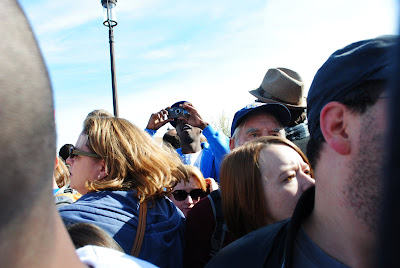 In many ways, it was too much. Three hours of standing and straining, a random gust of wind for a cold deep breath, sirens rescuing the faint, the microphones onstage softer LOUDER softer LOUDER softer... ("If you can't hear, then drink!" a girl near me said, dangling her nalgene, like duh) I got a better sense of the rally itself when I went back later and watched online (although, hearing Cat Stevens and Ozzy Osbourne battle with "Peace Train" and "Crazy Train" in person was pretty damn cool). But the coolest thing? The COOLEST thing?

Standing in the midst of a crowd of people so large, I didn't know where it started and where it ended, didn't know where I started and where I ended. Singing the National Anthem with them in front of the United States Capitol. Knowing that friends and family from all parts of my life -- high school, college, abroad, internships -- were somewhere in this overwhelming mess of humanity, even if I couldn't see their faces. Striking up conversations, laughing with strangers. These people live around me and next to me and far away from me, and these lives that we create for ourselves give us niches of belonging, which are wonderful and sacred, but when we get out of those niches, even just for a day...

I dunno. It's just cool. You see differently.

Afterwards, I squeezed between people and purses and posterboard and mosied down towards the less-cluttered Capitol in the rich autumn light, waiting for AT&T to resurface so I could call Kenzie and Bill. Last summer, Carrie and I sat by the reflecting pool and just gazed up at it for awhile, this stalwart symbol. This time I ventured behind it. The sun hit at just the right angle to glint the flying flag, and the columns and dome stood strong and quiet, watching the crowds break back into famliarity and head for dinner. This building -- crammed and cracked with so much human stress, frustration, miscommunication -- stays firm and watches the sun. 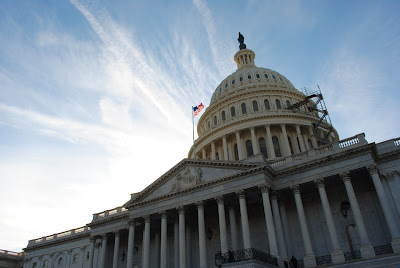 "But we live now in hard times," Jon Stewart said. "Not end times."

At the corner, my two friends were waiting, waving, and as we traipsed sore-footed down the street, I picked up red leaves and thought about how we were friends in one place and now we're friends in another. This history carries on. In May I will be at their wedding. "This is definitely starting to feel like home," Mackenzie said, "but it's nice to have people here who make it even more like home."

On Sunday morning I took the escalator out of the (marvelously empty) Dupont Circle metro and Kady pulled up on her bicycle. We sat together in a pew at The Foundry United Methodist Church, church-sisters from Atlanta, clutching shared stories and singing in a new sanctuary.

"Our families are families," Reverend Dean Snyder explained, "because we find holiness in the mess."

I scribbled that one down.

P Street was next, to Church of the Pilgrims. I stepped inside with Jamie and John in my heart, Ashley up front, and Patricia waving vigorously from her seat -- such a part of helping me come into my own at Davidson, and now not one but both of us on the other side of the tassel.

I picked up the pace after the service, heading back to the metro to meet Julie and Donita in Alexandria. Tried to cross the street at a strange intersection, and a woman stood with me and as we waited we talked -- about the traffic, the glorious weather, I explained that I'd come from North Carolina... small things, in the grand scheme so normal and unimportant, and we walked together past the Farmer's Market, and as I branched off she spoke again. "Have a safe trip back!"

Stewart, once more. "Because we know instinctively as a people that if we are to get through the darkness and back into the light we have to work together, and the truth is, there will always be darkness. And sometimes the light at the end of the tunnel isn't the promised land. Sometimes it's just New Jersey."

[Or the Dupont Circle Metro.]

"But we do it anyway, together." 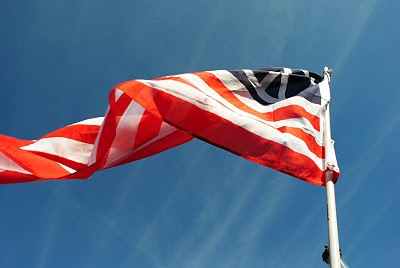 Posted by Claire Asbury at 1:10 AM
Labels: 20something life, politics, reflections, transitions, travel