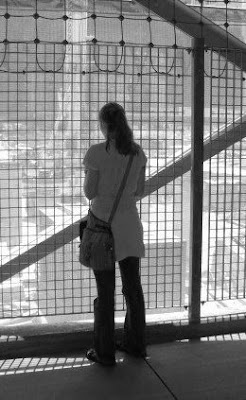 12:30 AM
[I wrote this when I was 14 years old, in February 2002, for my 8th grade drama class. It was performed as part of our spring show that year. When I reread it now, it seems corny in its way, but it's a true testament to that day for me and for those who were with me. I've posted it here seven times now and I won't ever stop.]


That day was such a weird day. It almost even seems like a dream, although I know it was real. That’s the scary part- it was real.


As I walked into third period Chorus, my teacher seemed very distressed. She snapped at us to sit down and watch the television. She said that the World Trade Center had been attacked, and so had the Pentagon. Attacked- such a foreign word to me, to all Americans, that it must have been a joke.

But for the next hour, as all of us watched the terror unfolding live before our eyes, we discovered that the carnage couldn’t have been more of a reality. Craning our necks to see the television, we heard the voice of a reporter describing what she saw inside a public school near the Twin Towers. There was no loud talking today, no laughing, and no smiling. And amidst the tears and soft whispers going on around me, I heard my teacher go “Oh my God," and we turned to see one of the towers begin to collapse. Soon we heard that a plane had crashed in Pennsylvania, but it hadn’t hit anything. My friend was saying that since it seemed that they were heading South- whoever “they" may be, we didn’t know yet-, they would hit us next. There were rumors about the Mall of America in Minnesota being bombed, and a car bomb in front of the State Department in Washington, DC. Students were being sent to the counselors’ office right and left, and panic seemed to ensue as we continued to watch, seeing the second tower come down, knowing that all of the people in that monstrous, grand building were dying. We didn’t know what was happening, who had committed these horrendous crimes, and what they were planning to do next. All the security that I had felt only fifty minutes before had collapsed with the towers, and now seemed to be lying in the rubble of what would soon be known as “Ground Zero". The bell rang, and it was a terribly surreal feeling to be walking through the halls like usual, but knowing that something horrific and shocking had happened, something that had changed the lives of all the people walking around me. My friend was talking about her aunts who live on Long Island- she hoped they were okay, and she was so nervous. I remember saying, “I will be so pissed off if anyone is laughing about this." We got to fourth period Health, and our teacher said that America had been very, very lucky up until now. This happens every day in other parts of the world, he reminded us, and we are just getting a taste of what they experience. Instead of having class, we went back down to the Chorus room to watch the television. I couldn’t stand it. After asking permission, I fled to the counselors’ office. As I walked in, I heard teachers talking. One said that Israeli troops had surrounded Jerusalem and would not let anyone get out, in case the people responsible were from there. My heart filled up, knowing that other nations were willing to help us; maybe some good will come out of this terrible thing, I thought.

I was ushered into the meeting room where a few other girls from my class were, with one of the counselors. Some were crying, and I can’t really remember exactly what I did in there. If I spoke, or if I just sat there, it’s gone. But afterwards, the counselor led me into her office, privately. I told her about how scary this situation was, and how I was nervous about more attacks coming. She said that her husband had told her that all airplanes had been grounded and that the only aircrafts in the sky at the moment were those of the Air Force. While that made me feel a little more comfortable, I was still very uneasy. We talked through all of fourth period, which made me relieved, since I hardly wanted to go back to that television that had brought me so much fear.

My fifth period teacher was in the office when I came out, and we walked to her class together. Ironically, this was the day that we took our test on the American government. During lunch, people kept being called out of the cafeteria to be checked out by their parents. The security guards had their walkie-talkies and I remember thinking that they were going to announce another attack or something. Inside this room, everything seemed fine, but outside, in our world, everything was extremely wrong.

When I got to sixth period, I asked my teacher if I could call my mother, to tell her that my Drama club meeting was canceled for the day, due to “everything". Even though I tried her cell phone, she didn’t answer, and as I was walking out of the front office, in she came, my brother in tow. She asked me if I’d like to go home, and I said yes. I went and gathered my things from French, and left with her.

At home, I was trying to forget about everything that had happened, so I actually took a nap. Listening to one of my favorite CDs, I tried to block out everything, but it was still there, still fresh. That night, I watched President Bush address the nation. I was afraid he’d declare war on someone or a country, but he didn’t. My parents said that was because he didn’t know who to declare war on in the first place. I don’t remember anything else from that night. I just felt different: vulnerable and unprotected, just like everyone else in America at that moment in time, I guess.

It’s been SEVEN YEARS since this happened. We have lived one day at a time, because we never know what will come next. And even if we are scared or uneasy at times, we are all survivors.


This is my song, O God of all the nations
a song of peace for lands afar and mine.
This is my home, the country where my heart is;
here are my hopes, my dreams, my holy shrine;
but other hearts in other lands are beating
with hopes and dreams as true and high as mine.


My country's skies are bluer than the ocean,
and sunlight beams on cloverleaf and pine;
but other lands have sunlight too, and clover,
and skies are everywhere as blue as mine.
O hear my song, thou God of all the nations,
a song of peace for their land and for mine.
(Lloyd Stone)
Posted by Claire Asbury at 1:10 AM
Labels: September 11